Right To Play and the Olympic Refuge Foundation Come Together

“This partnership brings together two dynamic organizations with a shared vision to help children to rise above adversity and support cohesive, safe, and peaceful communities,” says Right To Play CEO, Kevin Frey. “Building on our shared values and commitment to safe and positive child and youth development through sport and play, we are well placed through this partnership to empower children in Jordan to learn, lead, and live in peace.”

Over the past seven years Jordan has provided refuge to more than 1.3 million Syrians with currently over 671,000 registered refugees, of whom 239,000 are school-aged children and youth. This shared project will operate in the northern provinces of Amman, Zarqa, Irbid, and Mafraq, where roughly 81 per cent of Syrian Refugees live within host communities.

By following the Jordanian Government’s guidelines, specifically the urgent need to better integrate Syrian children at school and community levels, our project will strengthen community participation and enhance social cohesion between Syrian and Jordanian children and youth. Divisions among children from different backgrounds can often lead to bullying and violence at school, which has a negative impact on the children’s education and their attendance. Syrian refugee children also face financial constraints, unstable housing, harassment and violence, which leads to a low interest in school with nearly 50 per cent of children between the ages 12 - 18 dropping out. Building bridges, both in schools and communities will ensure positive outcomes in attendance and education. 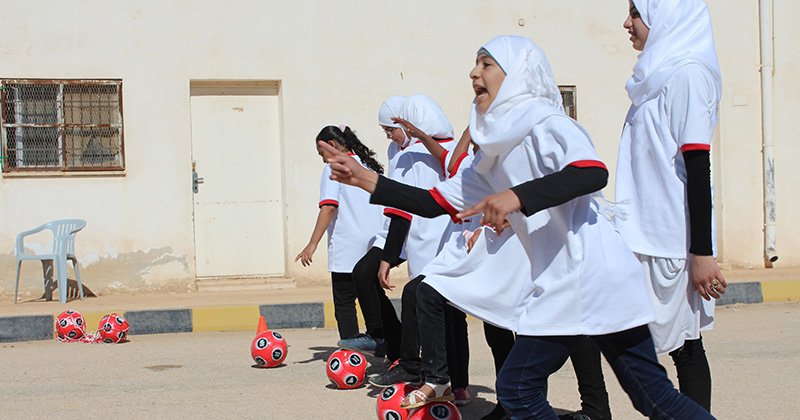 Through play-based activities like football, Right To Play-trained physical education teachers and coaches will address and ‎prevent violence and discrimination among students to foster social connections in their communities. The girls and boys will learn acceptance, tolerance, understanding and communications skills—all in safe spaces, including enclosed football pitches so that girls are also able to fully participate in the program.

“The Olympic Refuge Foundation is implementing its first pilot projects and we are proud to count Right To Play among our partners,” says International Olympic Committee Director General and Chair of the ORF Executive Committee Christophe De Kepper. “The organization is a pioneer in the sport for development arena who has helped transform millions of children’s and young people’s lives through sport. We are confident that this project will not only contribute to the protection of vulnerable youth and children in Jordan, but also demonstrate the important role sport has in providing safe spaces and building a peaceful and inclusive society.”

By working in government schools and with local community based organizations, the project will promote community engagement with ongoing activities and events designed to build inclusion, acceptance, trust communication and collaboration.