Finding the Strength to Help Others: Aya’s Story 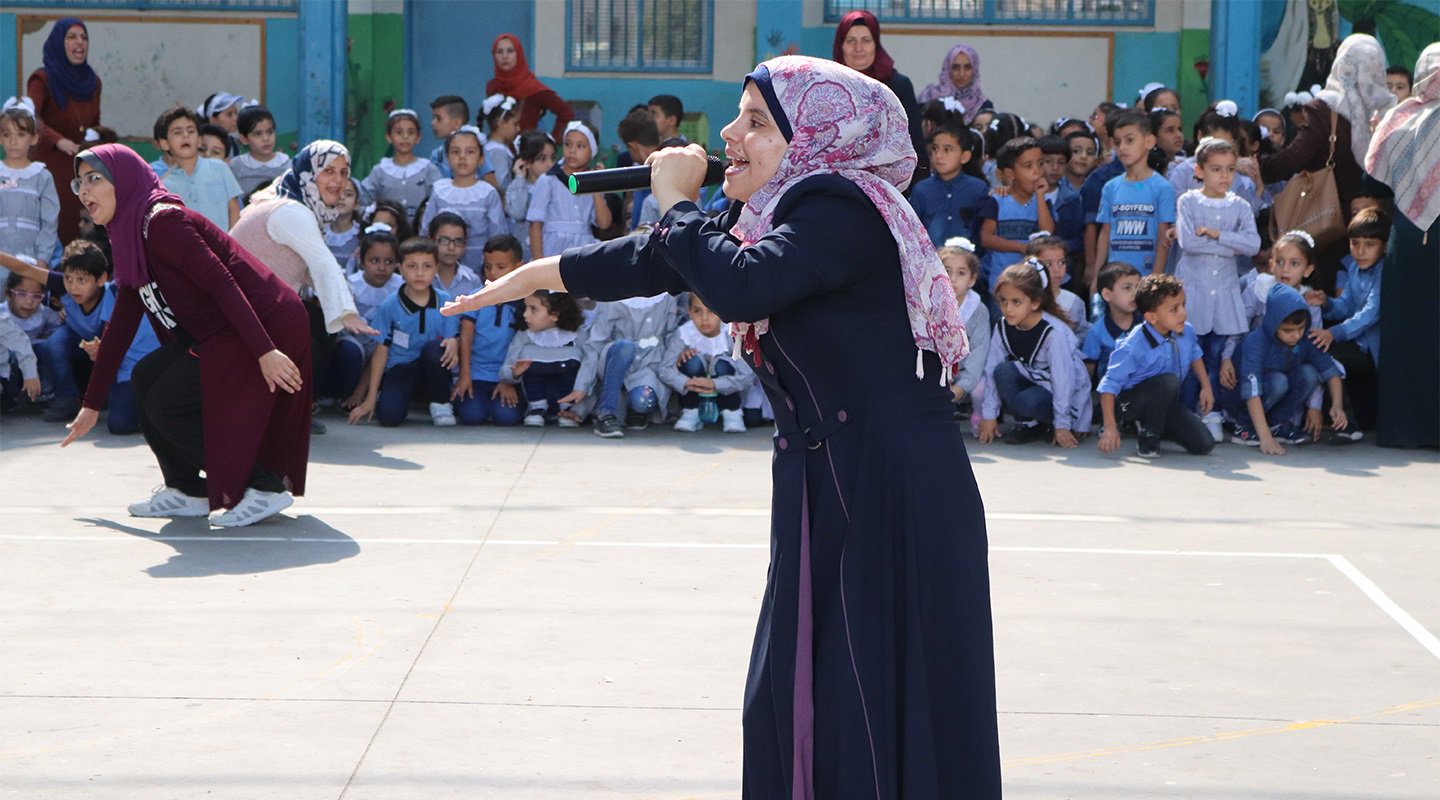 How a young woman found her confidence

It’s a Play Day at a school for girls in Gaza in the Palestinian Territories, and the entire fourth-grade class has gathered for the starting assembly. One of the coaches who will be leading them through the activities steps forward to address the crowd of young girls. Just a few years ago, Aya, the coach, would have been trembling at the thought of addressing such a large group. But she faces them confidently and delivers a stirring speech that builds their excitement. “Believe in truth, humanity, and life,” she tells them. As she triumphantly concludes, her face is shining and the girls break out into applause.

Aya grew up in Gaza after the Second Intifada, with border closures, blockades, civil conflict, wars, overcrowding, and poverty making life increasingly difficult for the residents. Aya learned to keep her head down and stick to her studies to avoid getting in trouble. She was shy and nervous, and had trouble speaking to others, but she was a good student who took comfort in her studies, and in 2014, she graduated from university with a Bachelor’s in Education.

Aya dreamed of helping children who were facing the same challenges she had. She wanted to help them to build up their confidence, wanted to empower them to become changemakers in their lives and their communities.

“I USED TO BE VERY SHY. I ALWAYS TRIED TO ISOLATE, AND IF I HAD TO COMMUNICATE WITH OTHERS, I COULD NOT EXPRESS MYSELF WELL OR EVEN KEEP EYE CONTACT.” – AYA, 27

She also began to realise that her lack of confidence was holding her back from being the best teacher she could be. She had the knowledge to teach the way she wanted to, but didn’t have the confidence to put it to work. “I never made a move to do things. I did not take any risks or have a spirit of adventure. I used to be in constant hesitation,” Aya says.

She started volunteering for a local NGO, hoping that it would help her feel more confident. The NGO was a local partner with Right To Play, and before long she was working directly with girls and children with disabilities to boost their confidence. 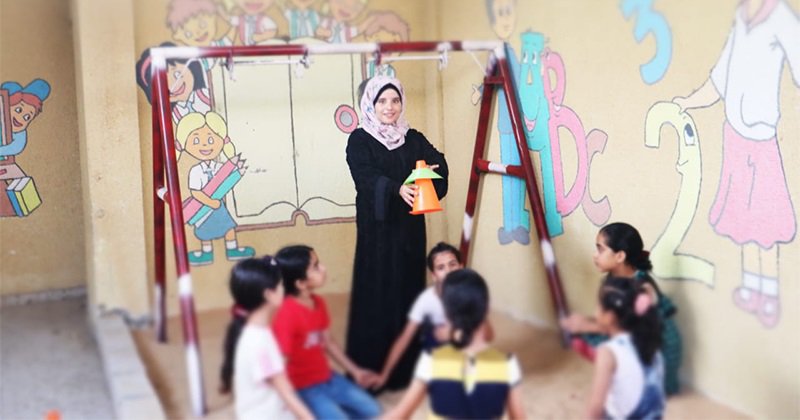 When Aya first started with Right To Play in 2014, she was shy and nervous. Now, she fearlessly speaks to groups of girls and leads them through confidence-building activities.

Aya’s first project with Right To Play was a project called Red Ball that used sports and games to help children learn to cooperate, express their emotions, and cope with negative experiences effectively. This work is tremendously important in Gaza, where children experience high levels of fear and distress from ongoing violence that interferes with their ability to attend and excel in school. As she helped girls and boys to develop the strength to face these challenges, she found that she was growing too.

“There was a big difference between my academic experience at university, where I only enrolled in courses seeking grades, and my practical experience in the field,” Aya says.

It took a few years of practice and hard work, but her confidence in her own leadership began to grow. She started feeling more comfortable speaking her mind freely, and she delighted in teaching the children, and the other coaches as well.

“I started to believe more in myself and my abilities after I joined the Right To Play family. My entrepreneurial spirit is part of who I am now. I gained more confidence in public speaking and became more open and fluent when communicating with others,” she says.

After a few years working on the Red Ball project, she was promoted to Head Coach, a position that meant she was leading and training other volunteer coaches, and helping to plan projects throughout Gaza.

Since 2016, she has been involved with Taalom, a project that creates safe, accessible learning spaces for girls and boys. Aya travels to kindergartens across Gaza, where she trains coaches on how to encourage the participation of girls and children with disabilities and to ensure they are fairly treated. The teams she leads focus on very young children to ensure they get the right start and build habits that will help them as they continue in their education.

Her work on the Taalom project is particularly important because while the Palestinian Territories have a high enrollment rate of 95%, dropout rates are high. By age 15, 25% of boys and 7% of girls have dropped out of school permanently. Building strong academic and life skills in young children that last throughout their educational careers helps them to stay in school and complete their education.

“Right To Play has brought the best out of me. It made me who I am today, a proud woman. I was able to break free from the old me to become a new woman of principle.” – Aya

While Taalom is her main focus, Aya has also helped with many other projects during her time with Right To Play. She helped pilot work in psychosocial support, where coaches use games and focused activities to help children cope with trauma, work that has since gone on to be implemented in our refugee programs throughout the Middle East.

In addition to her work as Head Coach with Right To Play, Aya also helps other NGOs and local schools to adopt Right To Play’s play-based approaches to empower girls and boys. She is particularly proud of a partnership she launched that used play to help young children with Down’s syndrome and autism flourish in local schools.

Help children in the Palestinian Territories 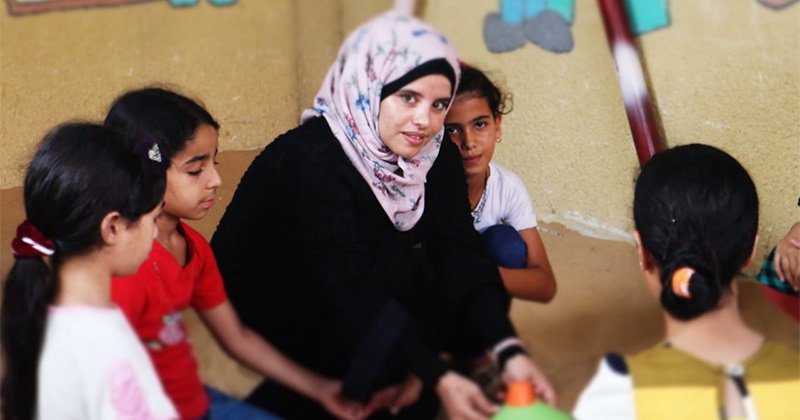 Aya works as a coach in an extracurricular program run out of a school in the Palestinian Territories. She leads games that teach girls to cooperate and build their confidence.

Though she never would have believed it when she started, one of the parts of her job that she loves the most now is speaking publicly to large groups of students at events. Instead of the anxiety she used to feel, she now loves to see how they are inspired by her words.

“Never underestimate your small daily experiences and victories, they are the reason for who you are now, a person full of devotion and love in all fields,” she tells them.

“My experiences with Right To Play have taught me to embrace challenges, for every new challenge will build my strength and shape my personality. All this has helped me to be more involved in civil society and community work.” – Aya